The report was prepared by the Bankwest Curtin Economics Centre and the John Curtin Institute of Public Policy, and supported by the Western Australian Private Education and Training Industry Association (WAPETIA). The report focuses on trends and future scenarios in international student enrolments across all education sectors. The report offers options that could assist in the reversal of the decline in Western Australia’s share of international student enrolments.

The VET sector has been more successful, with an increase of share of the national market to over 9 per cent, which has primarily been through private providers.

Professor Duncan reports that “our findings suggest ‘selling’ Perth and WA as a desirable study destination is an important priority in developing the State’s future international education strategy. The attractiveness of Western Australia as a study destination for international students could be enhanced with streamlined access to courses, and by enhancing the student experience in WA. This would serve both to attract students to the State and to create future cohorts of advocates for study in WA.” 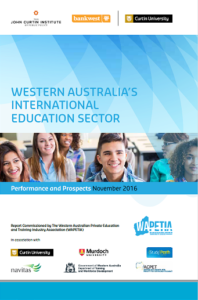